Create an Account - Increase your productivity, customize your experience, and engage in information you care about.

On November 10, 2020, the County Board voted unanimously to conduct a programming study for a potential Dakota County Library in South St. Paul. The proposal sought $50,000 to study a new location at 7th and Marie Avenues, with the City conducting a traffic study of the area as well as giving the land to the County if the site were approved for further consideration. The study also sought the authorization of a joint powers agreement with the City to secure funds in the amount of $15,000 for a study of the library's current site. Regardless of location, the study will consider the size of a new/renovated facility and construction costs, with $6,000,000 as a construction guidepost.

A project team of County and City staff convened in early 2021, many assessments as well as a traffic study were conducted, and the programming study was completed in May 2021 for the County Board's deliberation.

The programming study project team recommended that the optimal size of a library built in South St. Paul to Dakota County standards in terms of services, space considerations, amenities, etc., would be 16,146 GSF with the location on City-owned property at 7th and Marie Avenues. The total cost of this project was estimated at $8.3 million ($6,225,000 construction cost).

On June 8, 2021, the County Board voted 6-1 in acknowledging the City's proposal to join the County Library System while offering the land at 7th and Marie Avenues as a library site, directing staff to begin negotiating terms and agreements to accomplish this proposal, and finally instructing staff to proceed with designer selection for the potential building, returning to the Board for contract approval in August. If approved, the remaining schedule for the project consists of design and bidding by July of 2022 and the completion of a new building by late 2023.

On March 2, 2020, the City Council voted unanimously to submit a proposal to Dakota County concerning the transfer of library operations from the City of South St. Paul to Dakota County Libraries. On March 9, 2020, the Library Board voted in favor (5 ayes, 1 abstention) of submitting this proposal in order to gauge the County’s intentions or interest toward the South St. Paul Public Library, anticipating further discussions regarding the library’s future with the City Council.

On July 20, 2020, the City Council voted 5-1 to adopt a resolution clarifying the City’s preferred site of 7th and Marie Avenues for a new library. This was in response to the County deciding to maintain Lawshe Museum on its current site; therefore, the City’s original preferred site that would have encompassed SSP Library’s current site in combination with the museum’s land is no longer a viable option for the County.

As part of the community engagement process concerning the future of South St. Paul Public Library, every SSP household will receive a paper survey (PDF) in the mail in early January 2020. Although just one survey is being mailed per household, any and all members of the household may take the survey. Residents have the option to take the survey via the paper format or online. The online survey can be taken in either English or Spanish, and Spanish (PDF) and English (PDF) paper copies also will be available at the library.

Paper surveys may be dropped off at the library or at City Hall. It is requested that surveys be completed no later than January 31 (extended from January 24).

The survey, which should take no more than five minutes, will cover current services and programming at the library as well as questions regarding potential upgrades, users’ library preferences and opinions, renovation and building costs, and residents’ interest in merging with the county or in supporting a referendum to improve our city library.

To assist residents in filling out the survey:

In October 2019, City staff kicked off the community engagement process at “On the Road Again” to share information concerning options for the future of South St. Paul Public Library and to obtain broad-based and representative citizen input to aid in the decision-making process.

A basic general Library Survey (PDF) was created to gauge the library needs of our residents as well as their interest in a library upgrade of any kind. (Spanish version (PDF) A more detailed survey will be mailed out to all residents of South St. Paul in January 2020.

Help Us Write the Next Chapter (PDF), a library fact sheet, was created to outline the essential points of the discussion surrounding the library. These points follow an ABC approach of Autonomy, Build-Out, and Cost Impacts. (Spanish version (PDF))  A narrated companion video was developed for social media outlets and websites.  (Spanish video)

An in-depth look at these options, as well as other factors impacting future choices, is provided in the Final Report on Potential Options Dealing with the Future of the South St. Paul Public Library (PDF). This document, with ample appendices, addresses the question of a City- vs. County-operated library, site options, financing options, continued operations of the library during construction, potential partners/shared services in a new or remodeled facility, potential uses of the current library building, and community engagement.  It is the result of the Library Action Plan, which was drafted in the spring of 2019.

Community engagement opportunities will occur in the future, but residents do not need to wait to express their opinions on their City Library!  Please do contact members of the City Council or the Mayor regarding your concerns.

On April 29, 2019, the City Council and city staff participated in a goal-setting exercise to determine top priorities for the coming year.  The future of the South St. Paul Public Library was a top goal for both council and staff, and a Library Action Plan (PDF) was devised to study current issues and options in order to present potential scenarios to the public based on current information.

The June 24, 2019 Council Worksession Report (PDF) includes a Memo regarding the Library Action Plan; Dakota County’s response to specific questions regarding the library; a Memo from LeVander, Gillen & Miller, P.A. concerning the creation and control of the city library; the June 10, 2019 Worksession Packet regarding the Library Board’s value of an independent library to this community and support of LSE Architects’ Option C1; and the Phase One Report of Discover Together: South St. Paul.

Items in the MOU concerned staffing; service levels; the possible transfer of the collection, equipment, etc.; the short-term and long-term options for the library on its current site or elsewhere; community engagement; and a timeline with a preliminary decision on potential library coordination or joinder by September 30 when the maximum levy is set by the City.

The County provided these reasons for not approving the MOU:

In June of 2016, the library contracted with LSE Architects of Minneapolis to conduct a space study/mechanical needs assessment of our current site. KFI Engineering was responsible for assessing the building systems (heating, cooling, electrical, etc.), while LSE staff focused on workflow, public needs/uses of the building, technology improvements, etc.

The library was originally built in 1927; in 1964, the library was expanded to provide better service to the community. After retiring the bookmobile, the bookmobile garage was converted into a meeting room in 1999. The current library is approximately 11,800 square feet.

Library staff provided input regarding their work areas, and the public responded to print and online surveys regarding current library services. The study (PDF) was completed in December 2016 with a recommendation to remodel the 1927 original library while creating a new addition with underground parking, enlarging our current footprint to 17,000 square feet. This concept would alter the current four-level library to two levels, bring the library up to code (mechanically, electrically, ADA, etc.), provide private study areas as well as larger community rooms with current technology, move the teen area up to the second level, and provide staff and patrons with improved sightlines throughout the building. The initial cost estimate for this remodel is $4,494,320. The Library Board approves this recommendation but is also open to further study of various designs and potential collaboration with other agencies.

This is but one possible vision for the library. More reflection, public input and assessment will follow this initial proposal. The full study, as well as a handout (PDF) with features of this proposed renovation, is available for viewing at the library. 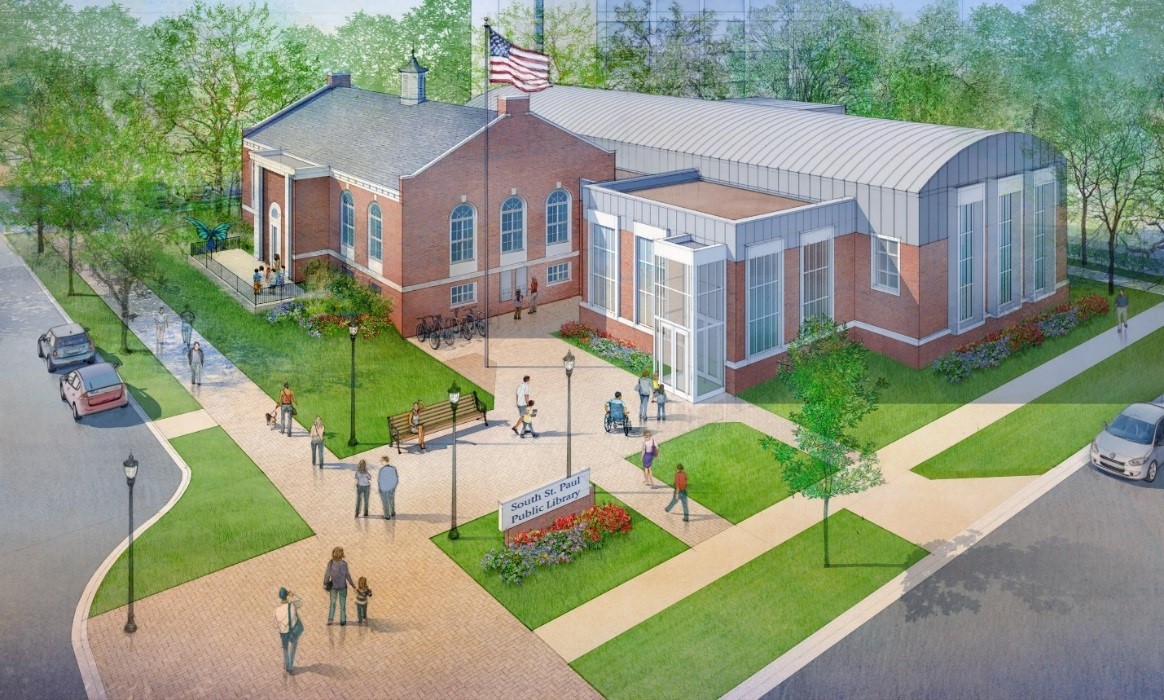 /AlertCenter.aspx
Library at Home
Resources for Youth
Get a Library Card Online
Connect with Us
[]